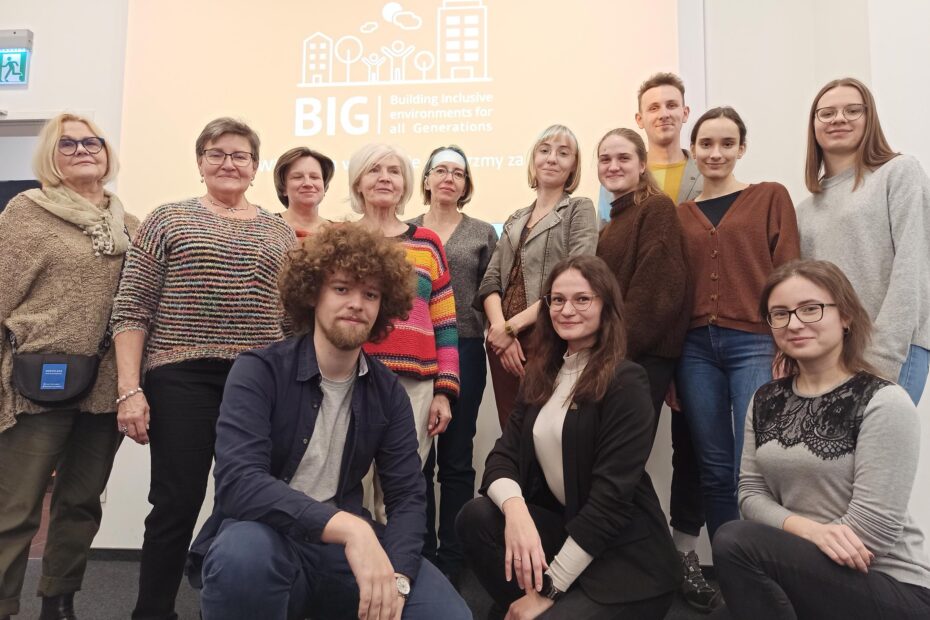 A Multiplier Event took place in Warsaw on the 17th of Dec. to promote the results of the BIG Game project. The event was organised by the Mimo Wieku Foundation and attended by students of spatial planning at the Warsaw University of Technology (8 people), seniors cooperating with the Intergenerational Activity Centre (3) and an educator from the Centre. During the meeting, we tested the BIG Game workshop methodology developed as part of the project. There was a wide age range among the participants: from 20-25 years old, two 40-somethings and three over 60 years old. The workshop started with an ‘ice-breaker’. Participants were divided into pairs and were asked to tell each other who they were and what they would take to a deserted island. The other person in the pair then told the forum about it. This was very well received, the group integrated quickly despite the large size.

During the workshop we looked at the challenges and problems faced by two game characters: Peter – the teenager and Ewa who suffers from dementia. All participants experienced the stage of growing up and being a teenager. Due to the different timing of this process, their experiences were different, but there were also a lot of similarities. The conversation was very open, with one of the seniors initiating the topic of sex education, which did not exist during her time as a teenager. The younger participants also acknowledged deficits in this area. We also talked about transgenderism and gender identity issues, which are now very common among young people. The conclusion was that despite technological advances and unlimited access to information, sex education in Poland is still insufficient. The conversation also highlighted the need for a separate space at home for a teenager. Often, a difficult relationship with siblings can result from sharing a common room. Two participants in the meeting, however, stressed that they are an only child and would give a lot to have a sibling, even if it would mean having a difficult relationship.

The second part of the meeting focused on dementia and the challenges associated with it. It turned out that not many people have had direct contact with it. Only two workshop participants shared their experiences of caring for a relative with dementia. Therefore, the BIG Game scenes showing real-life situations that involved a person with dementia were very helpful: Ewa and her husband Joao. This part was also very creative and educational for the participants.

The workshop time passed very quickly, even though it lasted more than four hours. The participants praised this form of education very much, they liked the direct contact with others and focus on different challenges in life, which often remain a taboo subject. After all, the ability to see the needs of others is the basis of inclusiveness.

previousAgeing in your village – Knowledge Café
nextBIG Newsletter #3 (EN)
We use cookies on our website to give you the most relevant experience by remembering your preferences and repeat visits. By clicking “Accept All”, you consent to the use of ALL the cookies. However, you may visit "Cookie Settings" to provide a controlled consent.
Cookie SettingsAccept All
Manage consent

This website uses cookies to improve your experience while you navigate through the website. Out of these, the cookies that are categorized as necessary are stored on your browser as they are essential for the working of basic functionalities of the website. We also use third-party cookies that help us analyze and understand how you use this website. These cookies will be stored in your browser only with your consent. You also have the option to opt-out of these cookies. But opting out of some of these cookies may affect your browsing experience.
Necessary Always Enabled
Necessary cookies are absolutely essential for the website to function properly. These cookies ensure basic functionalities and security features of the website, anonymously.
Functional
Functional cookies help to perform certain functionalities like sharing the content of the website on social media platforms, collect feedbacks, and other third-party features.
Performance
Performance cookies are used to understand and analyze the key performance indexes of the website which helps in delivering a better user experience for the visitors.
Analytics
Analytical cookies are used to understand how visitors interact with the website. These cookies help provide information on metrics the number of visitors, bounce rate, traffic source, etc.
Advertisement
Advertisement cookies are used to provide visitors with relevant ads and marketing campaigns. These cookies track visitors across websites and collect information to provide customized ads.
Others
Other uncategorized cookies are those that are being analyzed and have not been classified into a category as yet.
SAVE & ACCEPT