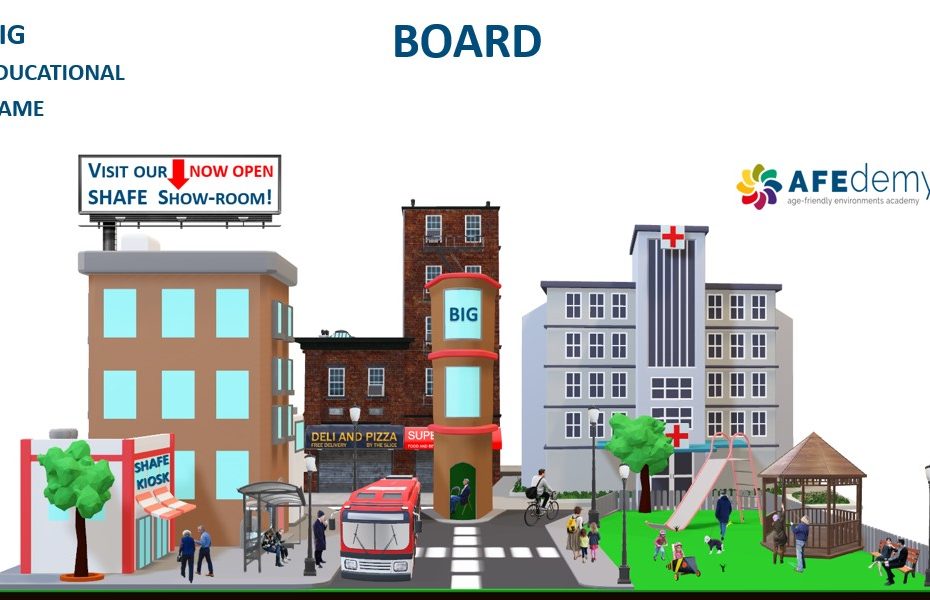 The BIG game project started almost a year ago and is right on track to develop the game. The storyboard is ready and a designer to draw the characters has been assigned. We are looking forward to sharing the first results with you soon!

The project team, consisting of coordinator AFEdemy, SHINE 2Europe, ISIS Sozialforschung, Mimo Wieku and The Hague University of Applied Sciences, held interviews and workshops to develop the storyboard of the BIG game. The team decided to include 5 main characters: Peter, an adolescent with loneliness issues, Anna, a pregnant woman, Dennis, an older person with mobility issues, Ewa (and her husband João) who suffers from dementia and Waldemar, a single father with a small daughter.

All characters live in BIG City. The player visits BIG City and meets on the square the mayor. She invites the player to meet the characters, to talk with them and to see how they together could solve certain problems. The problems are related to the built or social environment and can be solved by including social, technological, digital or community solutions. If the player is able to solve the problems, and turn the city into an accessible, smart and inclusive environment, the player will receive awards while playing and a certificate at the end.

The game characters and their issues were discussed in national focus groups, organised by the partners. This lead to adjustments of the storyboards. Unreal problems and inconsistencies were tackled and erased.

At the moment, the Portuguese designer Tatiana Simoes is drafting the characters and the locations. A first draft will be ready for consultation in the beginning of 2022. We are looking forward to meeting you again to check with us the learning, the accessibility and the attractiveness of the game.

Tagi:BIG
poprzednieBIG aims to promote social inclusion through a virtual game
DalejBIG presented at an information event in Hanau, Germany
We use cookies on our website to give you the most relevant experience by remembering your preferences and repeat visits. By clicking “Accept All”, you consent to the use of ALL the cookies. However, you may visit "Cookie Settings" to provide a controlled consent.
Cookie SettingsAccept All
Manage consent

This website uses cookies to improve your experience while you navigate through the website. Out of these, the cookies that are categorized as necessary are stored on your browser as they are essential for the working of basic functionalities of the website. We also use third-party cookies that help us analyze and understand how you use this website. These cookies will be stored in your browser only with your consent. You also have the option to opt-out of these cookies. But opting out of some of these cookies may affect your browsing experience.
SAVE & ACCEPT